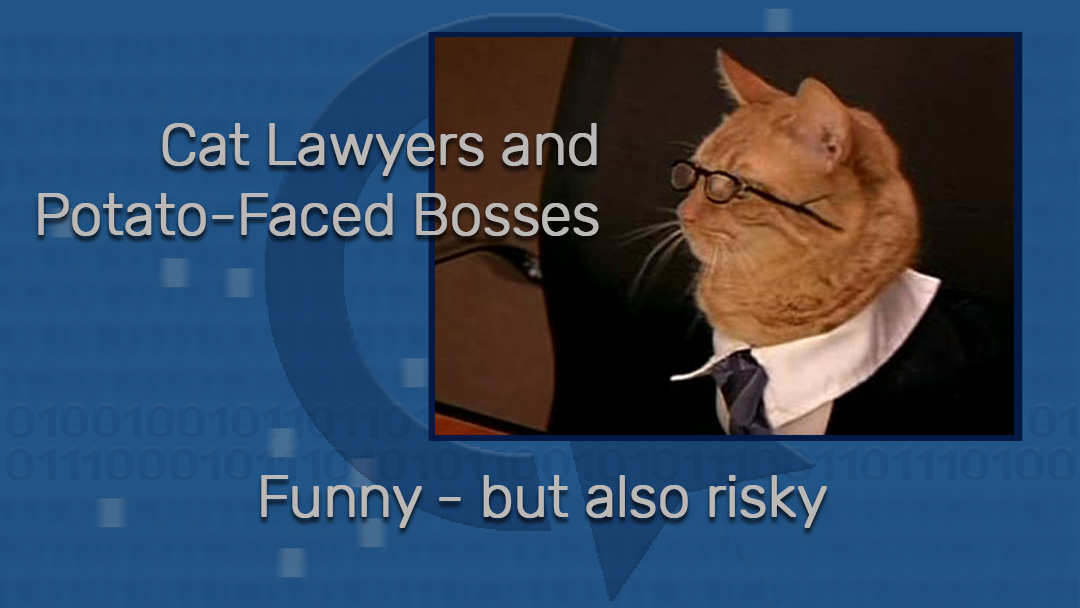 The recent news that a lawyer appeared as a cat in a court case Zoom call provided a great laugh – and a reminder – this week.

As the New York Times reported, Rod Ponton, a county attorney in Presidio County, Texas, was unable to figure out how to turn off the cat filter on his Zoom call during a court hearing. It turned out he was using his assistant’s computer for the hearing.

The story does not say why she had the cat filter but notes she was “mortified” by her boss’s experience.

Subsequent stories have quoted a Dell representative suggesting Mr. Ponton used a 10-year-old outdated computer, which had the filter preloaded back in 2010 or so. The filter was part of software preloaded on the system.

Last spring, another story told of a boss who accidentally turned on a potato-face filter – and appeared as a potato with her eyes and lips in her staff meeting, unable to turn off the filter.

We just want to note that this is risky behavior – using outdated systems or downloading filters to add “fun” to corporate meetings. We’re all bored now by the pandemic and its lockdown, but you still must exercise discipline with a work asset.

We recommend you not allow anyone – including yourself – to download outside software onto your work computer. Work software should only come from your IT team, and only after your IT team has vetted software for both security and compatibility reasons.

When you “innocently” download something that looks like fun, it could be malware built by hackers to fool you and gain access to corporate data through you. Or it could be poorly developed software that offers hackers a loophole to get past your organization’s cybersecurity.

Don’t be the employee discovered in a forensic investigation to have opened the door.

Also, you need to keep your systems up-to-date. The hacker who tried to add a dangerous amount of lye to the Oldsmar, Fla., water supply prompted an FBI warning about continuing to use Windows 7 and another out-of-date program called Team Viewer.

The hacker used both to access the water system and attempt to poison the water.

Mr. Ponton, the lawyer, meanwhile, should be buying his assistant a new computer. An assistant still using a 10-year-old computer doesn’t scream prosperous and successful, right?