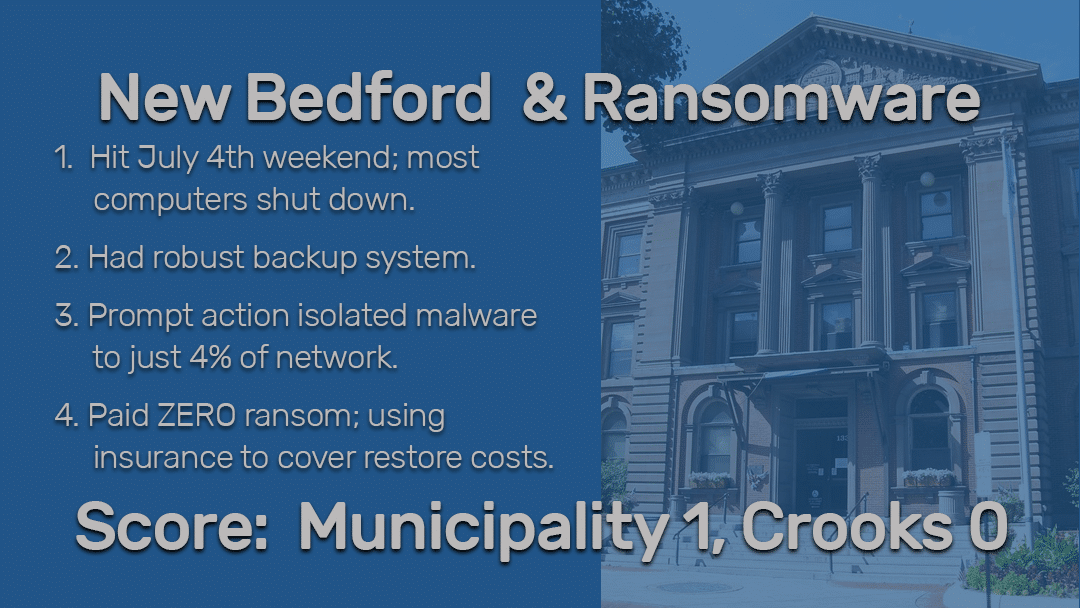 The city of New Bedford, Mass., recently revealed it experienced a ransomware attack over the Fourth of July holiday.

However, unlike other recent stories of cities getting hit with ransomware, New Bedford had a relatively happy ending.

A greedy crook demanded an eye-popping $5.3 million to decrypt the city’s systems. New Bedford countered with its available insurance amount – $400,000.

The crook rejected that offer but didn’t counter. The city didn’t pay.

Instead, the city’s IT team successfully used backup files to restore its system. The IT team also promptly reacted to the presence of the malware and was able to limit its spread to only four percent of the city’s computers.

It helped that the ransomware hit over a holiday, when most city computers were shut down.

New Bedford officials don’t think personally identifiable information was stolen, but they said they can’t be sure and are offering credit monitoring to city residents who request it.

The city is now beefing up its cyber security measures and completing the replacement of 158 desktops and laptops, out of its fleet of more than 3,500 computers. Costs will be covered by insurance, according to the mayor.

If you are worried your organization won’t do as well as New Bedford in surviving a ransomware attack, talk with our experienced team. We will get you prepared!