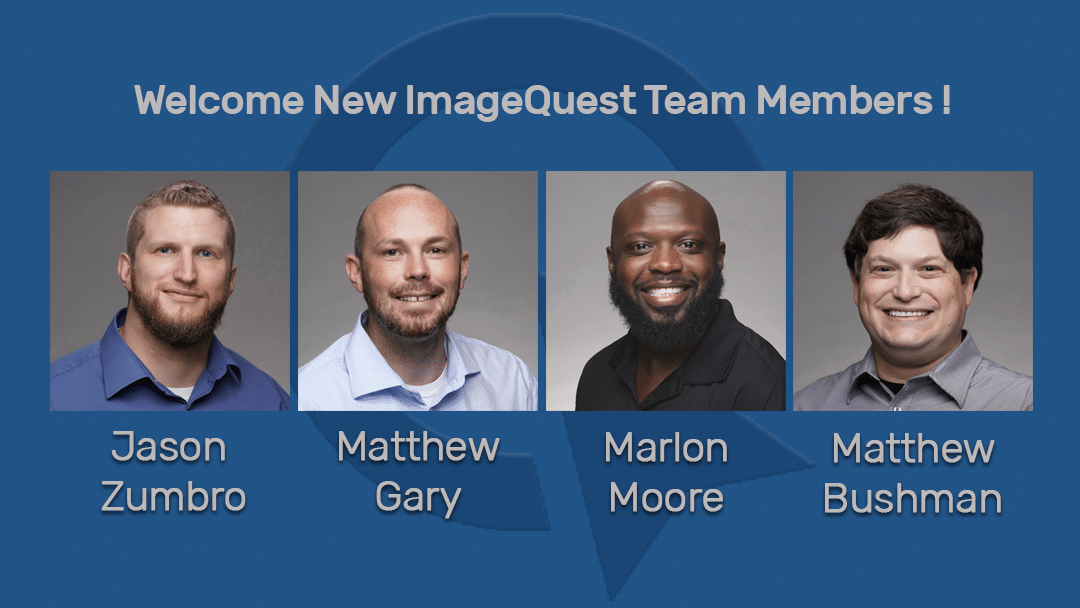 We recently welcomed four new hires to the ImageQuest team. Some of them have been with us for a few months but the coronavirus kept us from getting their snappy new photos.

Now that we’ve taken care of that, read on to meet them!

Jason Zumbro came to us from our client, Churchill Mortgage, and handles a lot of their Help Desk calls. He has an associate of science degree in Computer Networking Systems as well as an associate’s degree in Commercial Photography. Also, Jason has his CompTIA A+ certificate.

Jason started his professional life as a commercial digital photographer for retail. But as he used Photoshop to edit his images, he realized he enjoyed working with computers and IT.  He then pursued his computer networking degree.

While Jason says work keeps him pretty busy, he does enjoy getting outdoors, especially for significant hikes. Indoors, he relaxes with gaming and TV. He is married to Katie Zumbro.

Matthew Gary is a military veteran who has been blown up five times during deployment to Iraq, Afghanistan, and Kuwait. The IEDs gave him traumatic brain injury, from which he’s recovered, thank goodness, and back problems that led him to medically retire from the U.S. Army after 14 years as a Combat Engineer. Matthew also served four years in the Air Force before joining the Army.

His last year of duty, he took advantage of military education benefits to pay for his certification courses for CompTIA A+, CompTIA Network+, and CompTIA Security+  Matthew also has a certification for Fiber Optic Installation.

Matthew says he opted for an IT career because he didn’t want labor-intensive work due to his back, and he wanted a field that had a long-term demand for professionals. And, he added, “I like technology.” Matthew is married to Erinn Crane.

Marlon Moore also came to us from Churchill Mortgage, where he worked as an IT onboarding manager. He said he’s happy to join us at ImageQuest because he was ready for the variety of IT problems and clients he works with here.

Marlon’s had a lifelong love of computers and electronics and sought jobs where he could learn to master new challenges and skills. He’s worked as a casino Slot Technician, an Alarm Systems Technician, as Technical Service Representative, and a cable Communications Technician.

Matthew Bushman started his career as a project manager running corporate events – trade shows, conventions, conferences, outdoor festivals, and galas. But working until 3 a.m. and extensive travel led him to reconsider a passion he had growing up – computers.

Matthew has a Bachelor of Science degree in Information Technology with a concentration in advanced networking from the University of Phoenix. He also is a Microsoft Certified Professional.

When he worked for a corporate events company, he found himself installing AV equipment, troubleshooting equipment setup and networking, and even upgrading the company’s in-house IT systems.

Matthew said he was naturally drawn to that work because his parents always made sure he and his brothers had computer access when he was growing up. After getting his Microsoft certification, Matthew worked as a desktop support associate before joining ImageQuest.

Matthew and his wife Becca are expecting their second daughter in August.