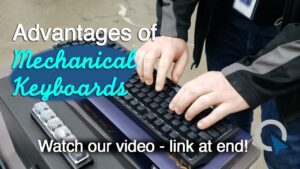 If you are of a certain age, you might be amused to learn that some modern office workers say the greatest keyboard is … the mechanical keyboards found on old IBM Selectric Typewriters.

Yes, that 1960s technology now represents the pinnacle of typing feel and sound. And a growing number of enthusiasts seek the Selectric’s equivalent in add-on mechanical keyboards.

If you’re not a geek, gamer, or a mad typist, you may not realize the growing popularity of mechanical keyboards.

The community r/MechanicalKeyboards on the social media site Reddit reached a million subscribers in December, after a slow start in 2012. The site says many fans of the keyboards joined in the last five years.

For an IT person, a mechanical keyboard is a nirvana. You sit and type all day – programming, editing, scrolling – and how your keyboard responds significantly impacts your work life.

A custom keyboard can be designed to fit your fingers better when typing, through layout or physical size and curves. It can light up or include shortcut keys not found on standard-issue keyboards.

For a gamer, the ability to execute game actions precisely and rapidly is a competitive edge. A mechanical keyboard provides much more precision – and more play options – than a modern laptop keyboard.

For an IT professional, a custom mechanical keyboard becomes a prized possession – the personal pocketknife, the custom car, the unique tool others need your permission to use. 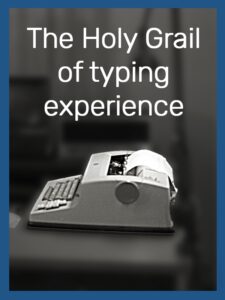 It’s all about the feel, the satisfying clicks when typing, and the confidence that the keyboard is accurately registering your typing.

Back in the late 1990s through the early 2000s, personal computers came with standard with basic mechanical keyboards. But then they disappeared.

The rise of the membrane keyboard

Membrane keyboards gained wide adoption by the mid-2000s. When a user presses a key on a membrane keyboard, the membrane – a silicon-based elastic – makes contact with an electrical circuit to trigger a keystroke.

Computer makers switched to these keyboards because they proved cheaper to manufacture, plus they met the criteria for lighter-weight laptops. Membrane keyboards also were quieter to use.

Soon they were everywhere, from Apple’s Macs and Macbooks to PC laptops and desktops.

Over time, though, some people found they didn’t type as well on membrane keyboards. Or they didn’t like the keyboard’s feel – they wanted to hear and feel the click of a keystroke.

Now, mechanical keyboards are a thing – so much so that fans collect them and enjoy discussing how they’ve customized their keyboards.

While manufacturers still ship membrane keyboards as the default choice, enthusiasts can find mechanical keyboards – and kits to assemble them – online. One vendor, Mechanical Keyboards LLC, is based within the greater Nashville metro area in Fairview, Tenn.

A top mechanical key switch manufacturer is Cherry, which makes a popular series identified by color. (Watch our video to learn more.)

These keyboards can run a couple of hundred dollars, depending on what options and style a buyer seeks. And some enthusiasts collect different keyboards for their design, function, and features.

If you want even more detail, check out Why You Should Buy Your First Mechanical Keyboard in 2020 on Medium.

For the record: Security

If you are an ImageQuest client and have users who want to bring their custom keyboard to work, our Director of IT, Kenny Gluck, says there are a few things to consider.

On the other hand, hearing other people typing away might inspire more productivity, too!

Want to learn more? Watch our team discuss their choices of mechanical keyboards.